I joined my tour of South India with no preconceptions. Most of the trips I’ve been on in the recent past have promised the wow factor; one sight or experience guaranteed to blow one away whether it be Macho Picchu, Angkor Wat, Mount Everest or Tutankhamen’s tomb. But this I knew would be different, and it turned out to be one of the most relaxing and memorable group trips I’ve taken part in.

My trip from Dubai to Chennai landed at a pretty unsociable hour, 2.15 in the morning! During the flight, I’d got myself in the mood by watching the movie The Best Exotic Marigold Hotel and now I was ready for whatever accommodation I ended up in! After sitting around until sun-up, I took a hair-raising taxi ride to Mamallapuram which involved high-speed dodging and darting for over an hour. I even had to shell out a few of my recently acquired rupees at three tolls which I was assured were not included in my taxi fare! When I arrived at the Sea Breeze Hotel I was pleasantly surprised until the receptionist pointed out that I was to be accommodated in the annexe down the road. Now I’ve stayed in some very iffy accommodation over the years, but this took the biscuit! Regular power cuts are a feature of Asia and normally hotels, restaurants and shops have generators which cut in automatically. But not at the Sea Breeze Annexe! It seems it broke down some time ago and they’d never got round to sorting it. Add to that cold showers and air con which made a lot of noise but did nothing, it was a worrying start!

However, my travelling companions and I managed a very sociable start to our holiday with a fishy meal, followed by a very alcoholic party in the room of our tour guide –something which was to become a nightly event for several of us! Normally I take copious notes which enable me to relate to you, dear reader, the names and dates of the sites we visited, but on this occasion, it dwindled out after a few days so I’ll have to let the pictures tell their own story in many cases!

Mamallapuram; now that was an interesting place. It has it seems, been a sculpture centre since the 5th Century. We walked miles and miles looking at gravity-defying rocks, sculptured friezes and temples which had been hewn from a single rock. Later in the day, I joined the cows on the beach! 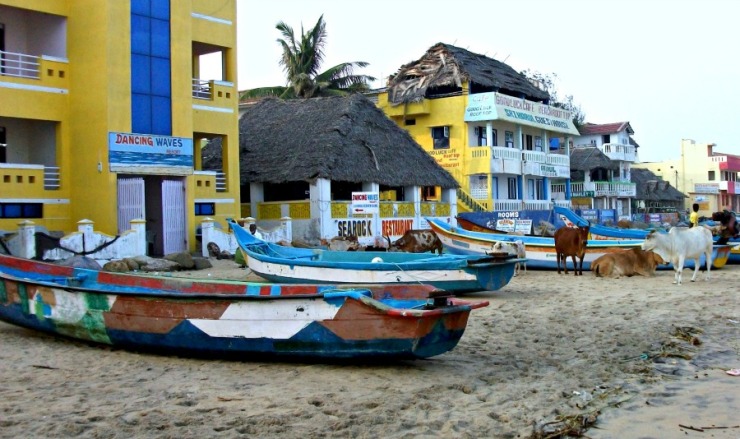 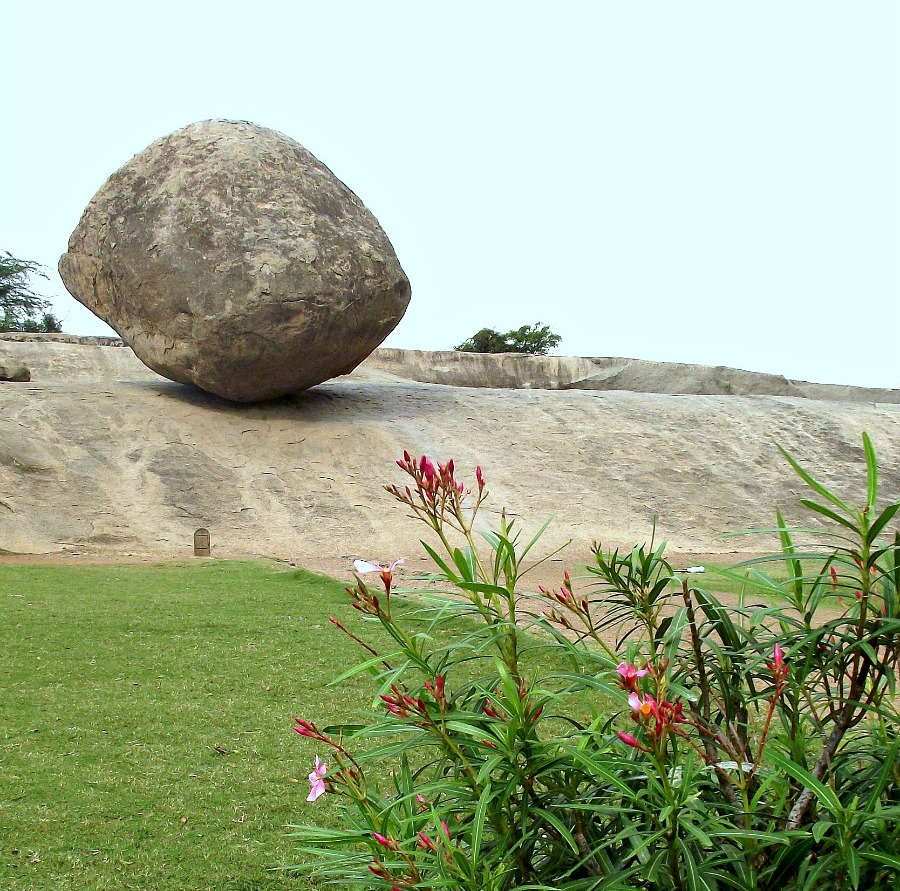 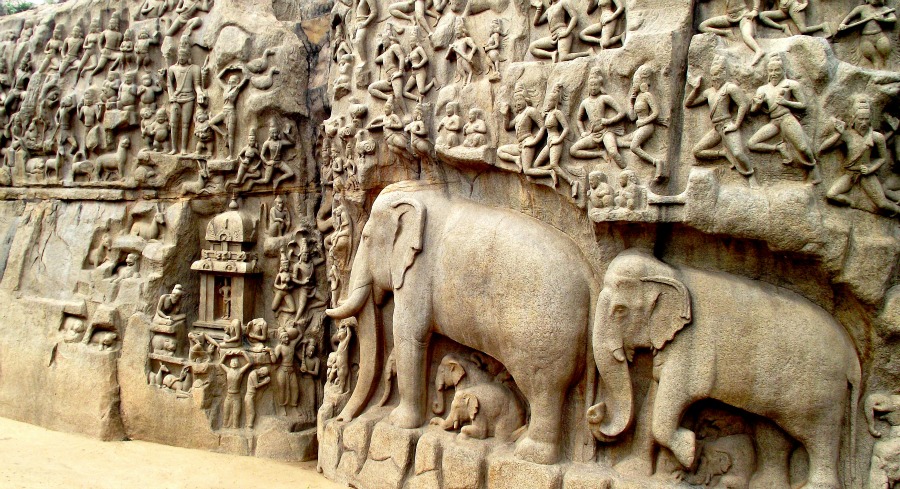 On the third day we drove for several hours to the town of Pondicherry which I’m told has over the centuries been occupied by the Portuguese, Danes, French and of course those land-grabbing Brits! It’s a bustling yet somewhat tired looking market town but fascinating none the less. It also plays host to the Auroville which is an idealistic ‘village’ with roughly 1800 residents from 38 nationalities, mainly Europeans, serving a Divine Consciousness. As you enter you are informed that ‘Auroville aims to be a universal town where men and women of all countries are able to live in peace and progressive harmony above all creeds all politics and all nationalities’. At its unfinished centre is its magnificent gold temple which is designed as a place of contemplation.

The village operates as a kind of alternative community, subsisting from handicrafts and alternative technology. It is however far from finished and one cannot help wondering if it ever will be! I was reminded of a similar objective undertaken by the tree hugging hippies who flocked to India in the 60’s (no, I wasn’t one of them. The nearest I got to it was climbing trees to get conkers!)

Our next stop was to Madurai which we reached by what was to be the first of several train journeys. Where do I start with Indian trains? Well, the first thing one has to learn is they tend to stop at the station for just two minutes after which they depart whether you are on, half on, or not on at all! Our venerable Health and Safety Department would have a fit if they saw that!

The train arrives with people clinging to the side, and after 120 seconds of frenzied activity it takes off again! Needless to say, the cleanliness inside the train leaves more than a little to be desired, but it seems to run very efficiently with a constant stream of blokes carrying trays on their heads flogging curries and the like. I’ll tell you more later. Incidentally, the Indian railway is the worlds second biggest employer after the Chinese army!

Madurai was a fascinating place. It is famous for a temple dedicated to the goddess Meenakshi, one of the re-incarnations of Parvati – Shiva’s consort.

The Meenakshi Temple is one of the finest and largest examples of Dravidian architecture, has an estimated 33 million sculptures and is always a hive of activity. The most fascinating features of the temple are its musical pillars, each of which is carved out of a single block of granite and each when tapped let out a musical note. Then there is the Hall of a Thousand Pillars, part of which was converted into a museum filled with sculptures and antique treasures. (Confession time – I hadn’t committed all that to memory – I cut and pasted it from the trip notes!).

We saw several weddings whilst there with worried-looking very young brides clearly anxious about what they were letting themselves in for! Oh, and the hotel we stayed in Madurai wasn’t at all bad!

Where next? Oh yes, Varkala in Kerala. We travelled there by an overnight train on which I had a compartment to myself whilst each of the others was occupied by up to four of my companions. I’m still wondering if they were trying to tell me something! I say I was alone but that’s not strictly true as I was entertained all night by two mice which were determined to rob me of as much sleep as they could.

I suppose you could call Verkala a seaside resort because it boasts one of the finest beaches I’ve seen since I was in Barbados. The whole length of the beach is fronted by magnificent red cliffs atop sit colourful shops and laid-back cafes. I have to admit that the never-ending steps down the beach and back were a bit hard work! 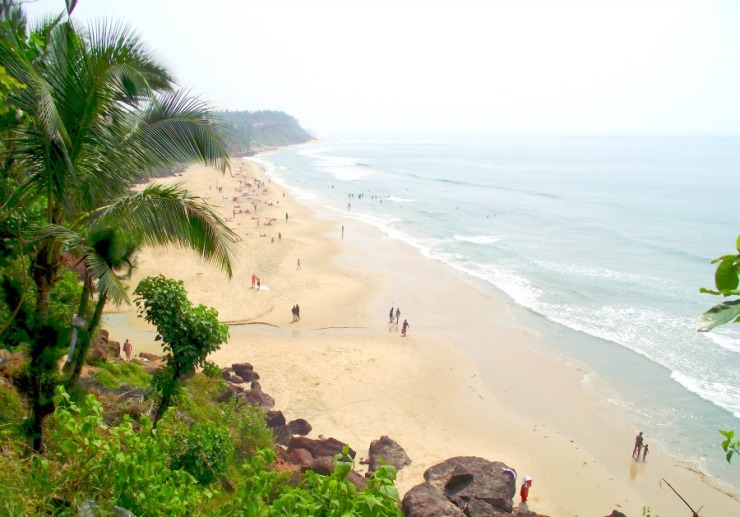 There is no town centre as such and the many hotels and guest houses are spread out along narrow mud roads and passageways. Our place even had a pool! I’m not normally one for chilling out, but this place was so special that even I managed to relax. 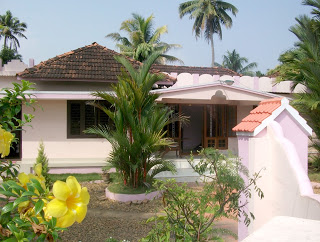 A trip by tuctuc, train and boat took us our next destination, Alleppey.Our little craft dropped us right outside a very pretty bungalow which was to be our homestay for the next two days as the guest of its delightful owner (her name sadly escapes me) It was all a bit basic with cold showers and doors which didn’t lock, but it was pleasant enough.

This part of the state of Kerala is mainly water. Several large lakes are linked by canals, both man-made and natural. Apparently, they are known as ‘backwaters’ because during the monsoon season water flows down from the surrounding mountains and out to sea, whilst in the dry season the sea water flows ‘back’ again! I don’t know if that’s true – our guide told me about it at one of our nightly rum drinking parties so I’d take it with a dash of salt (or coke!) Anyway, I do know that much of the land has been reclaimed and small communities live in narrow little settlements out amongst the canals. The area is served by water buses which carry the kids to school and everyone else to their destinations.

We spent a wonderfully relaxing day on a houseboat watching the paddy fields, coconut palms and fishermen go by whilst working our way through a chest full of cold beer and eating a fabulous meal cooked in the boats diminutive kitchen. 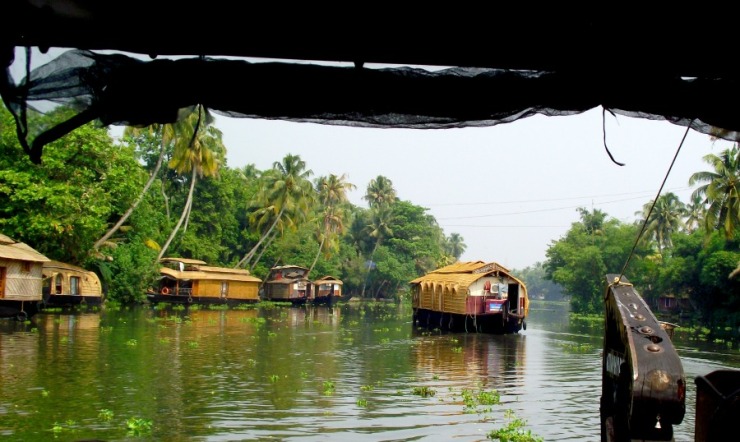 About transport. Obviously, the easiest and cheapest way to get around is in one of those little black and yellow autos. But my favourite way to go is in a Hindustan Ambassador taxi which started production in 1958 and it’s still rolling off the production line today. It was of course originally the Morris Oxford. 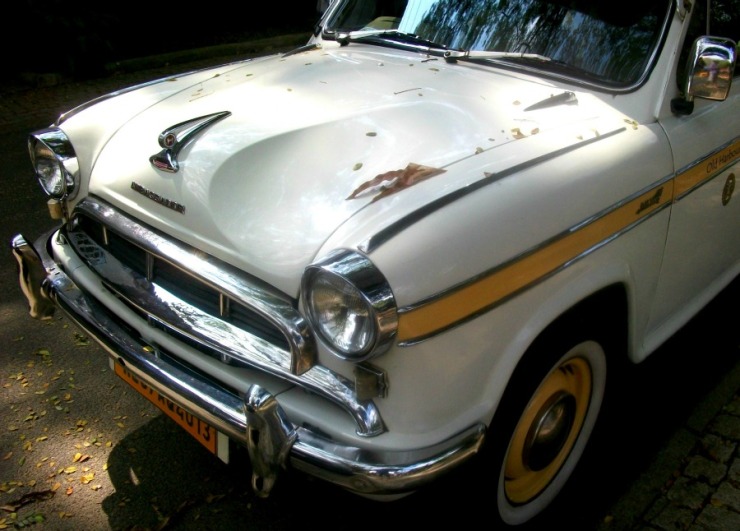 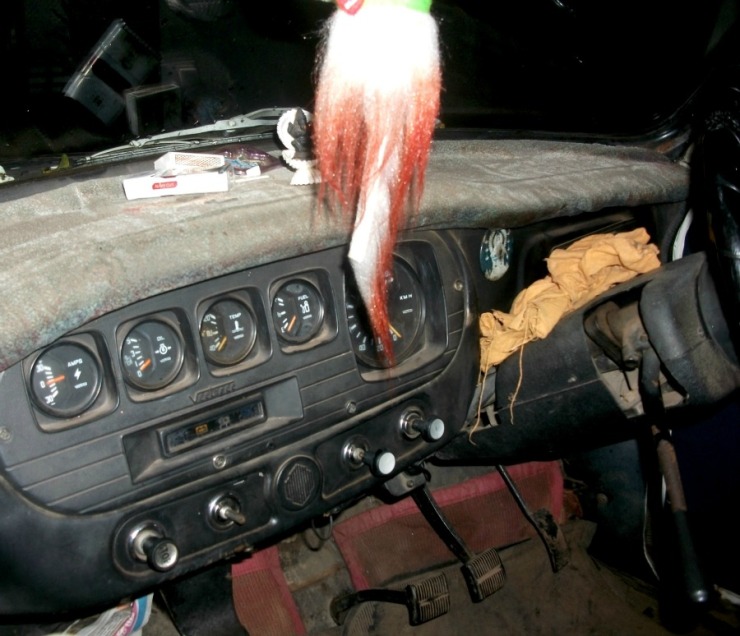 Another train took us to our final stop, Fort Kochi. This lovely place is home to an artistic community with artisan cafes and galleries. 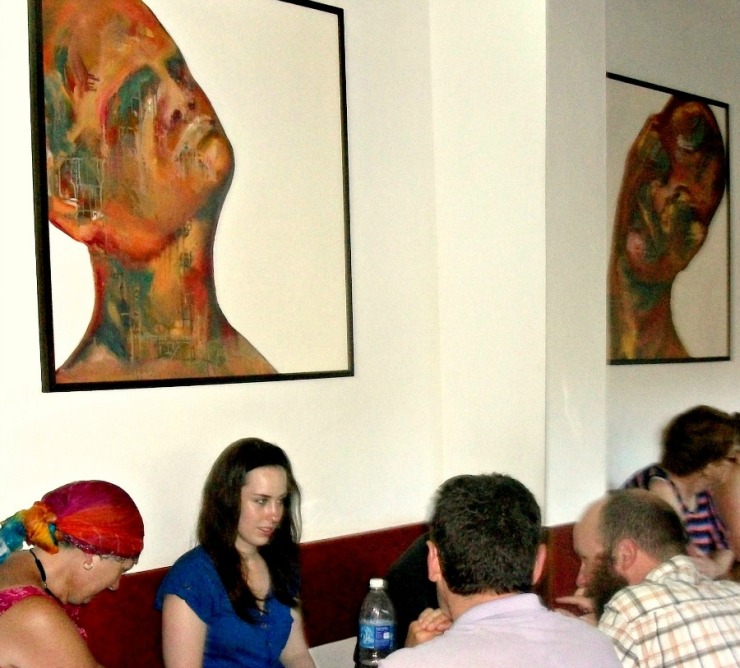 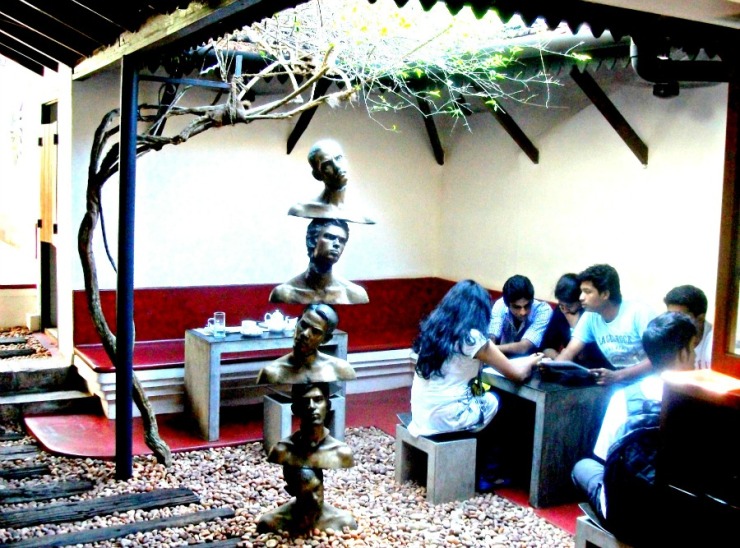 The air is filled with filled with the smell of spices, and it boasts the oldest christian church in India, St Francis’s, which in its time has been used by Roman Catholics, Dutch Protestants and Anglicans .It also hosts a Jewish community which has its own small but perfectly formed synagogue.

It was here we saw the famous fishing nets which feature in so many images of Kerala. 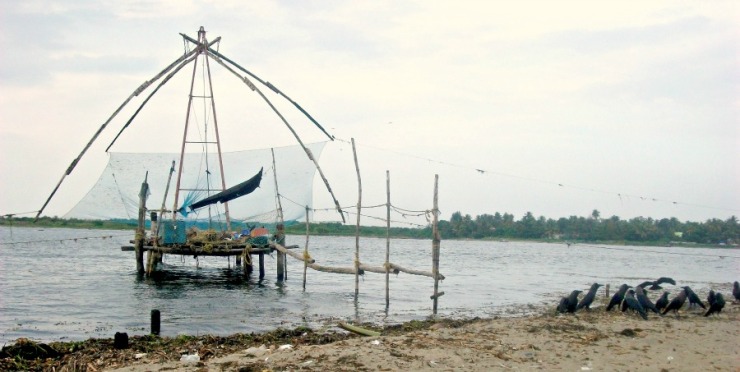 Hungry or thirsty? Take a look at some of the delicious food we enjoyed from basic breakfasts to freshly caught fish!

Thanks must, of course, go to Geckos Adventures and our genial host Vishi who informed and entertained us as well as hosting a nightly mini-party in his room!